You are here: Home / Provocations, Thoughts and Big Ideas / Natural Philosophy for Sustainability

Natural philosophy was, put simply, the antecedent of what we now know as science. Before the codification of science and sciences as aligned but separable disciplines for the study of the world, its causes and effects and underlying principles, such study and exploration was called natural philosophy. This can be defined as the philosophical (the study of the fundamental nature of knowledge, reality, and existence) examination of nature and the physical universe in order to understand the ways in which they work.

Natural philosophy still has much to tell us, not as an attempt to re-brand science to an older label, but because of the activities of the natural philosophers of history have resonances and implications which might be of value for those of us seeking to explore and stimulate sustainable change.

Whilst natural philosophy has a history dating back thousands of years, it played a significant role in the European Renaissance in developing the intent and principles of what we now call science.

In the 16th, 17th and 18th centuries such figures as Francis Bacon, Robert Boyle and Isaac Newton were as much Natural Philosophers as they were mathematicians, chemists and statesmen.

What has natural philosophy got to do with sustainability?

“Read not to contradict and confute, nor to believe and take for granted… but to weigh and consider.”

Firstly and most literally, natural philosophy is essential for sustainability because it is about science, and the need to be able to provide evidential proof of the way that our physical existence works. This is at the heart of any efforts to demonstrate that given courses of behaviour have cause and effect relationships that we may conclude have better and worse implications for the future of (our) life on this planet.

Secondly, and more avowedly philosophically, because the Renaissance philosophers were involved in a task with many parallels to the efforts of sustainability advocates now. They were comparing the observations and findings that arose from their natural philosophical investigations against the orthodoxy of what was considered to be “truth” in their time. This has a direct parallel to the work of many sustainability advocates, who explore whether the truisms and “laws” of economics and markets can be proved through evidence or whether they are in reality orthodoxies which do not stand up to scrutiny.

Thirdly, because philosophy is a critical component of navigating change, and in understanding why change is welcomed or rejected.

Why don’t facts change the world?

The third point is a key one in many discussions of sustainability. It is often a strongly held belief of environmentalists that facts alone have the ability to create change, that the “truth” has the ability to drive a shift from unsustainable to sustainable outcomes.

Indeed in my previous life in an NGO, it was possible to come across the attitude that time spent upon understanding why and how changes takes place (starting from the perspective that all behaviour arises from both custom and reason and is therefore innately complex in origin and in resistance to change) was a waste of time. The real way to create change, I was told, was to get people to read the latest study or set of scientific data, and that would itself drive change.

This is based upon the truism that the “truth will set you free”, however, if the truth contradicts your worldview, it can sometimes be easier and less stressful to either simply ignore that ‘truth’ or to find a truth of your own to provide competition.

Philosophy is intended to make sense of the world and it is just as important to explore and understand how things that may not make sense from one perspective might make sense from another. In situations like these, understanding what may look like irrational behaviour from one perspective but intensely rational from another should be the subject of philosophical, psychological and sociological inquiry, not just the province of the physical sciences.

To some extent, the idea of a new natural philosophy, a natural philosophy for sustainability, is seeking to emphasise that the science that has taken us for far in explaining the world around us must recombine with its philosophical component in order to play a role in delivering the future we want.

Sustainable change requires many components, facts are just one of these. Change occurs through a complex mix of factors, of which “truth” can often take a back seat to tradition, fear, self-interest and both psychological and economic investment in the status quo.

Understanding the range of reasons behind why change either does or doesn’t take place is a critical element of supporting and driving sustainable change, just as the physical sciences are in helping us understand both how the world works, its limits and trends. Combining these two dimensions of investigation and knowledge are essential, a Natural philosophy for the 21st century.

Out now – Towards 9 Billion book series

We have packaged a range of our writing over the last few years into a series of short books, which are available now as paperbacks or eBooks from Amazon. 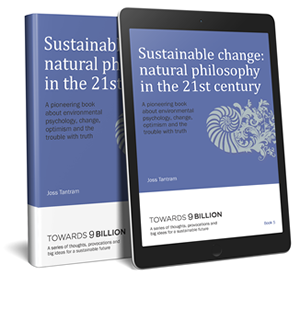 There are 5 in the series. You can download free excerpts of each book from: www.terrafiniti.com/towards-9-billion-books

Here are just some of the kind things people have said about our work:

“Big ideas for massive challenges: Terrafiniti’s Towards 9 Billion provides a wide range of solution-oriented perspectives on the prospect – often seen as daunting – of accommodating 9 billion people within the remits of our one planet.”

“9 billion people living within ecological limits requires us to rethink and redesign our human systems so that they are in tune with natural systems. To do this we need both critical thinking and generative solutions that are rooted in purpose, inclusivity and creativity. Towards 9 Billion e-book series is an important contribution to humanity’s great transition for living thriving on planet earth.”

“To all who are disenchanted by the lack of a coherent global approach to achieving sustainable development, take heart. Drawing on a vast array of theory and practice from systems thinking and natural law to finance, economics, literature, philosophy and corporate behaviour, Terrafiniti’s Towards 9 Billion helps us navigate the path to an uncertain future. Read and act on their work now or prepare for subsequent regret that you did not recognise them as geniuses of their time.”

Sowing the seeds of a sustainable world?

Just as plants and animals broadcast seed and progeny in vast numbers in the hope that some will survive and flourish, we hope that our ideas might have the chance to do the same; to find receptive places in which to thrive.

We hope that our writing and the books might play a small but useful role in imagining and building a future fit for people and the planet.